HUGE gratitude to Megan and Rick Prelinger for inviting PLACE TALKS to exist, for opening their space to new artist projects, and for supporting experimental, interdisciplinary practices in the Bay Area. 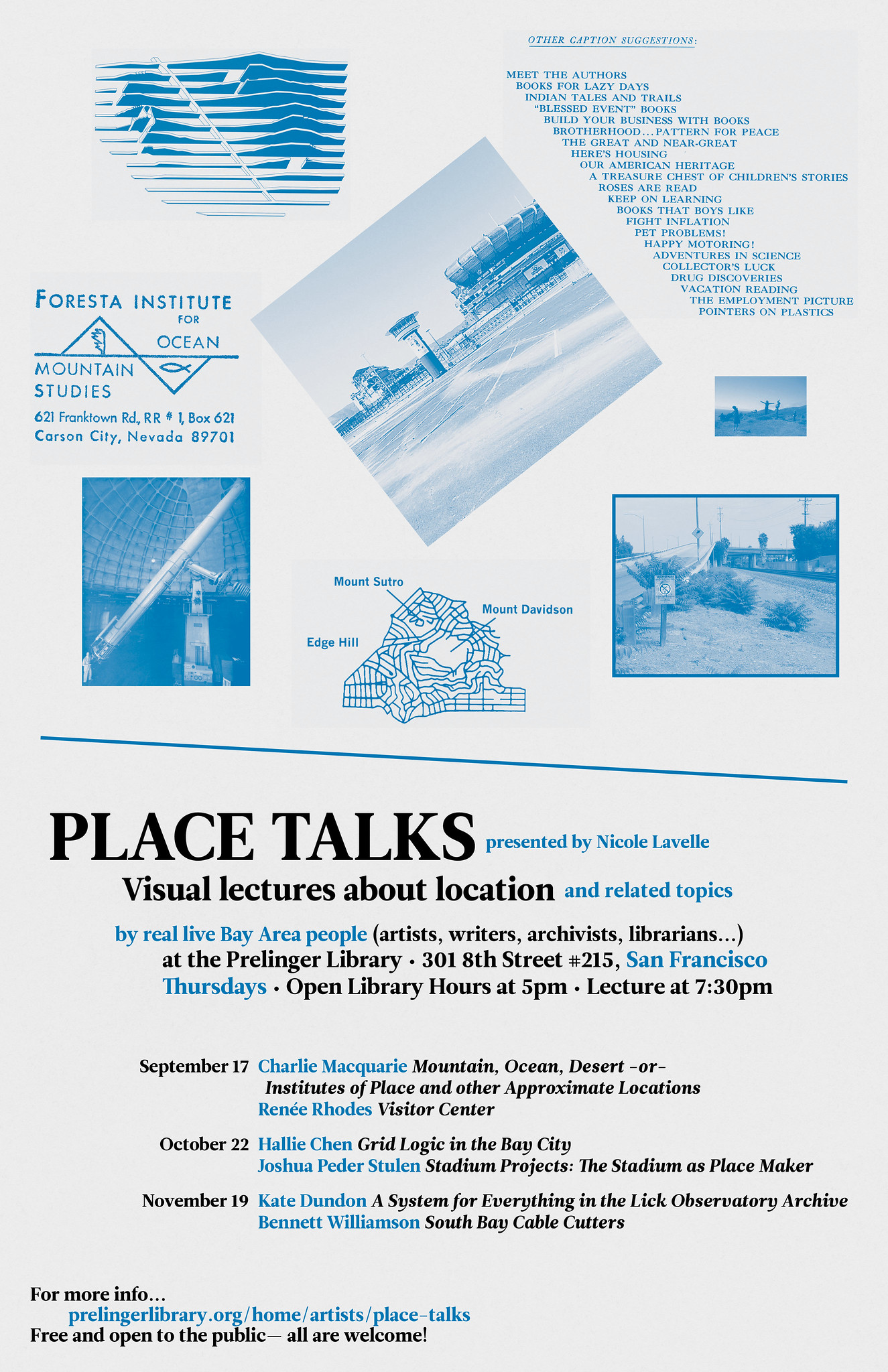 What does it mean to identify with a place? Who gets to know the identity of belonging, and what signifies responsible stewardship? Can it be a no trespassing sign, a walking meditation, or a library? Can it be cooking for an ecology camp or cleaning the teeth of Park Rangers? Can it be a stamp in a book? In an effort to explore the idea of "becoming native to our places," I will trace the unlikely path of the library of the Foresta Institute of Ocean and Mountain Studies on its travels from Washoe Pines Ranch in Nevada to its current home at the Prelinger Library, recounting tales of my own family's history in California and Nevada along the way. Can five generations of stories housed in the Sierra Nevada mirror our physically collected knowledge about a place? Does deliberate curation improve upon collections of landscape missteps, or even mistakes? Can humans survive at all? From high in the west the wind blows down through Jeffrey Pine and up again, carrying dust to desert peaks. The granite slowly decomposes above Little Valley. Washoe Lake is dry again.

Charlie Macquarie is an archivist and artist who collects and provides access to information as a creative and political act carried out upon the physical landscape. Originally from Northern Nevada, he now lives in the Bay Area where he works at UC Berkeley's Bancroft Library, serves as Librarian in Residence at the Prelinger Library, and manages and edits publications for the Greenhorns. He also maintains the Library of Approximate Location, an ongoing project collecting, documenting, and providing library services to the stranger sites and smaller roads and trails of the American West.

Visitor Center is a lecture and sharing of somatic exercises for the contemporary tourist. Tourist, in this case, doesn't mean global jet-setter but instead, wonders at the kind of tourist we might become in our own neighborhoods. The endless scroll makes it possible to be anywhere, anytime; but how can we prepare for the dizziness that accompanies all these efficiency systems? How can we physicalize the places (2-d and 3-d) that we inhabit? Visitor Center asks questions about re-locating and remembering despite our progress-oriented culture.

Renée Rhodes makes performative walking tours, somatic practices for the everyday tourist, crowd-sourced memories of lost landscapes, and togetherness practices for strangers. These gestures realize themselves through video, performance and writing. Recently, Renée has shared work at B_tour Festival in Berlin, on a Signal Fire Residency in the Mt. Hood wilds, at Southern Exposure in San Francisco, and also the Headlands Center for the Arts, where she is an Affiliate artist resident.

O'Farrell's Swing. Topographic resistance. What is all this nonsense? Ever been stuck on Montgomery trying to leave City Lights and can't figure out why on earth these grids would be bottlenecked in such in insane way? Ever stood atop Tank Hill or Twin Peaks admiring the isometric views of the city's buildings, all turned three-quarters toward the Ferry building? Who made these decisions? Why do the streets go straight up and down the hills of San Francisco in such a roller-coaster fashion? What is a grid? Information, speculations, and reflections on this special waffle iron we call San Francisco.

Hallie Chen was born and raised by Chinese-Taiwanese immigrants in the Bay Area. She attended the University of California Berkeley where she began unpacking the complex relationship between human beings and the environment. Areas of extended exploration included sustainable agriculture, urban planning, critical urban theory and the visual arts. After completing the Masters in Architecture program at Harvard University’s Graduate School of Design, she worked with Project H teaching design and building to middle schoolers in an attempt to influence the social and ecological processes that shape the world we live in. She now practices architecture in Jackson Square and Art all-over the place with Meg Fransee under the moniker Low Brow. She loves her family, farmers, pizza, swimming, and friends.

I currently live at 573 Andover St San Francisco, CA 94110 within the region known as Bernal Heights. Through my neighbors trees, I can see the outline of the (as-of-last-year) defunct Candlestick Park, the former home of the San Francisco Giants and 49ers. This daily practice of viewing the silhouette of an abandoned stadium has created a fascination within me. I know that one day I will wake up and this outline will be gone, my backyard will have changed slightly.

In the same manner that the sun rises and sets, the history of Candlestick Park is setting only to be risen by a new economic promise. This landscape is going to go through a radical social and economic transformation from a sporting and entertainment venue to a low-income housing facility and "urban outlet" shopping center, slated to open in 2017.

As I've sat looking out at this stadium every morning, I've begun to ponder: What will this architectural change mean for the community that has already developed itself around this region? What will happen in the long-term exchange of one form of cultural capital and leisure (sports and entertainment) for another (shopping) do for the quality of life?

Over the last six months I have been using digital marketplaces and websites like eBay, Craigslist, Yahoo, Google, YouTube and Facebook to search for ephemeral objects, images, and sounds that relate to Candlestick Park's history. During one of these eBay searches, I stumbled upon a Penguin children's book called Searching For Candlestick Park.

Joshua Peder Stulen was born and raised in Spicer, MN. He received a MFA in Sculpture from California College of the Arts in 2015 and a BFA in Sculpture from St Cloud State University in 2009. The predominant focus of Stulen's artistic practice is the cultural role of sports and leisure within society. Using performance, site-specific events, installations, and sculptural interventions, he explores the ways in which social forms and ideologies are developed in relation to these fields. Stulen has exhibited at Southern Exposure (San Francisco, CA), the University of Nevada Las Vegas (Las Vegas, NV), Art in Odd Places (Indianapolis, IN), the Lumberyard (Marfa, TX), the Berkeley Art Museum (Berkeley, CA), Sports Basement (San Francisco, CA), Art of This (Minneapolis, MN), and The Soap Factory (Minneapolis, MN).

South Bay Cable Cutters revisits two incidents of fiber optic cable sabotage in San Jose, and zooms out to look at their impacts on infrastructure, communications, development, and people's lives. The talk layers in voices of Bay Area residents from news sources, survivalist internet forums, interviews, and press releases. Together with the artist, they freely speculate on the practical and metaphorical effects of a large scale internet outage, as well as the motivations behind these still unsolved crimes.

Bennett Williamson was born in Boston and lives in Santa Cruz, California. He is an artist, DJ, and project manager working in various mediums. Interests include vernacular media and signage, weaving, woodworking, and the interplay of technology and popular culture.


Kate Dundon, A Place for Everything in the Lick Observatory Archive

Kate Dundon is an archivist at the University of California, Santa Cruz. Her interests include food, clothing, shelter, and organizing things.

< Back to PLACE TALKS homepage